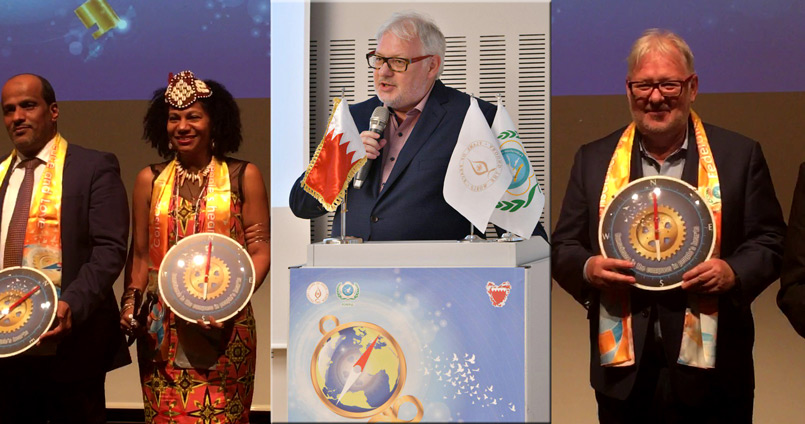 Posted at 22:30h in Allgemein by Bernd Wenske Redakteur
Share

Everyone has to take responsibility

The Federation of World Peace and Love (FOWPAL) works with various missions to the UN to promote the culture of peace with love and conscience. On October 10th, 2019 FOWPAL invited to celebrate the UN’s Designation of April 5 as the International Day of Conscience in Vienna.

Bernd Wenske made a speech about the responsibility of each individual in a global context:
I am NOT going to talk about human rights, starvation, child death, human trafficking, drug trafficking, slavery, pandemics, climate change, terrorism, loss of species, economic chaos, global migration, air pollution, or wars. By the end of my little talk, I am going to ask you a question about shaping our world for the better.

We don’t need to be worried, confused, or depressed about the world’s situation. There are things you and I can do to make things better. Any of the mentioned problems have been caused or worsened by globalization. And now they have come to a state where no state can solve them individually.

My message to you is: think global – act locally.

I want to tell you three stories about people in New York City and how they behave to find solutions that have an impact.

New York City Subway: 5 Million people rushing each day from east to west, from north to south and back. That is the total of the inhabitants of countries like New Zealand, Finnland or Norway). Everyone is in a hurry. Maybe this is NY-culture. But I know that a lot of them have to rush to their second or third job in a row to earn their living in an expensive city. So many people, crowded wagons and stairs between platforms.
You may think this causes a hectic mess, but on the contrary, there exist some unwritten rules in the head of a subway-user. Everyone is on his own, which does not differ, for example, from any major German city. In my opinion, subway-travellers in Germany behave more selfishly and inflexible. The NYC-people seem to take care of themselves without being involved in other people’s affairs. On the other hand, NYC-travellers are very polite. You hear excuses very often. They mostly offer seats to people that seem to need them, without being asked. It seems to me they found a practicable solution on how to deal with masses of people humanely.

I got a bit sick those days, went to a pharmacy in Wall Street. After getting advice from the pharmacist, took my medicine, and went to the cashier. I was the only client and the woman responsible for cashing served me. She started a small talk asking why I need the medicine. I told about problems with air-conditions mostly in subway trains. People lined up behind me, one by another, as the woman started a good talk with me about where I come from, about my experiences in NYC. Lots of stuff. There was NO moaning and complaining behind me, but this was the only cash register. One person asked for a self-service, and she pointed to the self-cash-register in the corner but continued talking to me. How can it be, that amid crowded NYC during rush hour, people can show interest in somebody else, on a stranger? She showed sympathy to me. It felt like everybody counts, and excellent communication is a heart-opener between people that don’t know each other.

It was a sunny afternoon when I met a young professional woman in the quiet coffee garden of the High Line Hotel. We were talking about her work with the Good Country project. Simon Anholt founded this project in 2014 and terminated in February 2019. The Good Country had the idea that no country on this planet is an island. They set up an index about how much a country contributes something good and valuable to people of other countries. To me, it seems to be a game with numbers, but it illustrates that everyone is responsible for himself and that we are all connected and responsible for the whole bunch of 7.6 Billion people on Earth.

As local problems can only be solved globally, we should tell our political leaders and leading companies to start more collaborating and stop competing. As we mostly do the opposite, it is hard to solve global problems without international collaboration.

I like the idea of Simon Anholt, who thinks that anybody on this planet in the position of power and responsibility has a dual mandate, that means two sets of responsibility. First, the responsibility for their people AND secondly for every single being on the face of the Earth, for the entire terrestrial globe.

This responsibility starts from within every human being: take care of yourselves and empower yourselves. Then take care of your family, the neighbours, and your city, followed by your country and the global planet. Don’t tell me this is difficult. I know that it is difficult. For sure. But it is worth an honest try. The smallest decision we make like changing a lightbulb at home has an international effect because of globalization. We have to learn to operate in a new way, not only being responsible in a single-mandate for our people and our own slice of territory.

My call goes to everybody listening: start thinking different, start with yourselves, your families, your neighbours. Spread good thoughts daily, so people get infected until positive minds are everywhere.

Here comes my question to you, asked by Sir Richard Branson on Instagram: „What do you personally think is one small way to change the world for the better?“